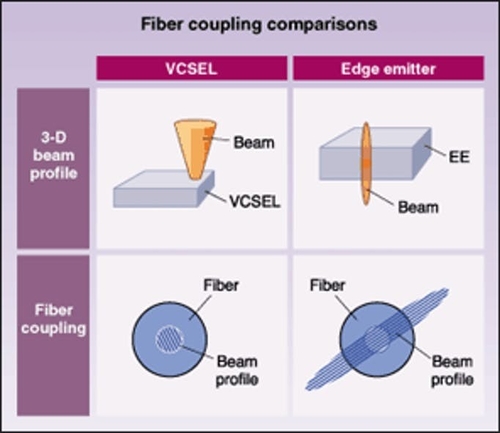 Traditional edge-emitting devices, such as the distributed feedback (DFB) lasers, launch light from an aperture on the edge of the device.

To create the horizontal lasing cavity within an edge-emitter, these devices must be put through a multistep crystal cleaving process. This process must be completed on all individual devices or rows of devices before they can be tested as lasers.

In contrast, a VCSEL is formed through vertical stacking of high-reflectivity mirrors that are grown in a single process. As many as 30 individual semiconductor layers may be stacked within a VCSEL structure, only 10 µm thick, which emits light vertically from the surface of the device through a circular aperture 5 to 25 µm in diameter. VCSELs can be fully tested while still in the wafer stage.

In contrast to the complexity of edge-emitters, the optical subassembly requirements for VCSEL devices are simple and straightforward. The inherently circular and low divergent beam characteristics allow for sharp focus, superior near diffraction limited performance, and a consistently spherical spot size.

As a result, VCSELs can produce a significantly higher directly coupled power that can be further improved by using a relatively inexpensive off-the-shelf ball lens. Because VCSELs' beam characteristics can be tuned to match the fibers' requirements, additional lenses can be eliminated for beam shaping or alignment adjustments.

An additional issue with DFB laser diodes is their susceptibility to back-reflections of light from the fiber resulting in increased optical noise on the signal. As a result, optical isolators are often needed to prevent reflected light from imaging back into the laser. In contrast, VCSELs can be designed to be less susceptible to these reflections. Simple modifications in the OSA design, such as beam defocus or intentional tilt, practically eliminate back reflection noise.